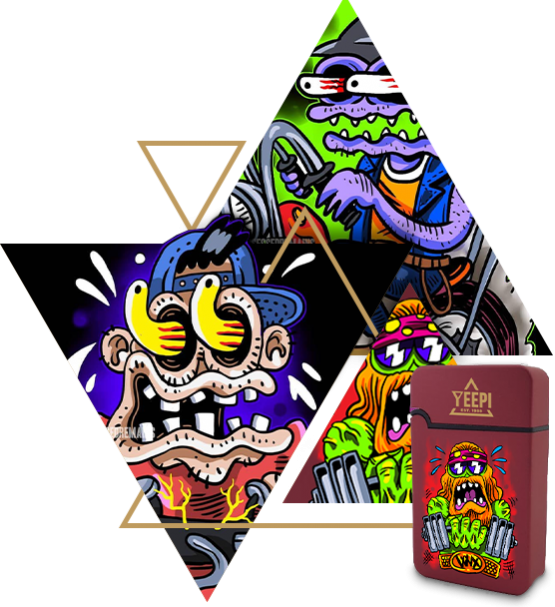 Fasrul, or known as @fsrlism, has more than 15 years of experience in graphic designing and illustration. According to this “otai” illustrator from Sitiawan, cartoon style has always been his go-to style for his illustration designs. Growing up he had always been invested in Kustom Kulture and oftentimes his designs are inspired by the Rat Fink cartoon which was illustrated by Ed Roth as he have always loved the gory side of cartoons.
When Fasrul first proposed these designs to Peter (Yeepi’s Managing Director), he loved the idea of the eyes popping out in every character and that’s how the “PopEye” series came out. The prominent feature of his designs is that all of the characters have extremely exaggerated bulging eyes which portrays astonishment and thrill of one’s interest and passion towards something.

Clash – Clash has always dreamed of being a great rock n roll guitarist just like his idol Slash, however he hates wearing a top hat which kinda clashes with his idol’s identity. But hey whatever floats your guitar and… ROCK STEADY!!

Mat Rep – From racing the streets to the tracks, Mat Rep really knows how to roll! They see him rollin’, they hatin’~

Momok – Looks can really be deceiving. Momok can look a bit scary sometimes and everyone would avoid him. Poor Momok, he just wants to have a good good time!

Tiancai – A lot of people are envious of Tiancai, he spends almost 80% of his time playing video games and still gets to score a 4.0 GPA. Little do they know that’s how he got his name!

Juwita – Just like Medusa, Juwita is a lovely woman who instead of turning men into stones with her gaze, she dazes them down with her eyes.. AND her TKO!